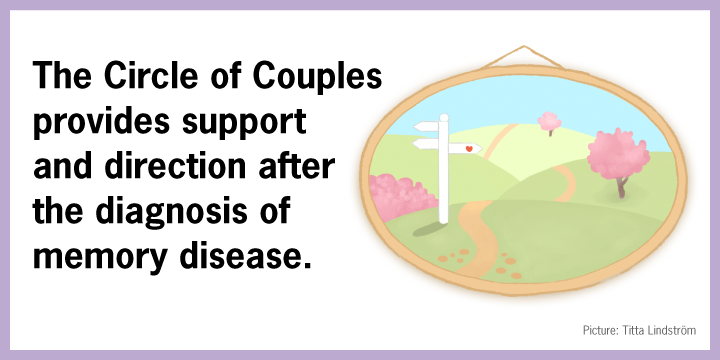 Progressive memory disorders pose a major challenge for society in the near future. Memory disorders may have a great impact on the affected individual as well as his or her spouse. There is increasing emphasis on the need for evidence-based interventions that are tailored according to the needs of these couples.

Omahoitovalmennus-toiminta – Circle of Couples is peer support group model for older people with memory disorders and their spouses i.e. older couples. The intervention takes place at the early stage of dementia as it offers a window to sharing information, enhancing participation in decision-making and peer support. The facilitation of the Circle of Couples group intervention is based on rigorous training of social work and healthcare professionals and volunteers.

The Circle of Couples group model is based on a randomized controlled trial, originally called Self-Management Groups for people with dementia and their spouses.  The concept is also inspired by the widely and systematically implemented Circle of Friends model. These two combined elements form the basis for the Circle of Couples group. The main objectives of the group are to provide peer support, empower the participants, enhance their wellbeing, encourage them to set goals for the future, and strengthen their participation in activities.

In this closed group model, the participants meet their peers once a week for two months. The group typically includes six to eight couples and four trained facilitators. The goal of the facilitators is to create a confidential and warm atmosphere for the group discussions. The content of each Circle of Couples meeting is tailored to meet the expectations and needs of the participants.

Older couples form the essential core of the Circle of Couples model. The Finnish Association for the Welfare of Older People wishes to promote and enable peer support among people with memory disorders and their spouses.

According to previous studies, the Circle of Couples group model provides effective support for older couples facing life with memory disorders. Participants have generally found their groups highly beneficial and a source of great support. Most groups have continued gathering independently after the facilitated two-month period.

The Circle of Couples training model

Circle of Couples training is a five-month training programme for social work and healthcare professionals as well as volunteers. The group facilitators take part in five one-day workshops, and they facilitate their first Circle of Couples group as part of their training. The aim is to enhance the knowledge and skills of the group facilitators, enabling them to plan and implement the target-oriented group model based on the needs of older people.

We are looking forward to hearing from you! We can be reached by email: laura.rautiainen@vtkl.fi and omahoitovalmennus@vtkl.fi

The Circle of Couples group model is based on the following elements:

For more information, please watch our videos with English subtitles: